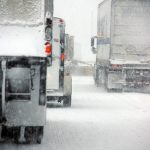 Truck driver risk was in full view of the nation as thousands of cars were stuck in Atlanta during a two-inch snowfall. There were over 1200 accidents. Residents couldn't get home and it became the lead story on national TV. Truck drivers were told to stay out of Georgia. From many points of view, it was a debacle.

Two weeks later WINTER came again to the South but this time the answer was "stay off the roads".

Question: would Atlanta drivers benefit from a course that taught them to drive in the snow.  Answer: NO!

That's because since this is such an infrequent event in Atlanta, even if drivers were taught how to drive on snow and ice (not an easy thing to do), they would soon forget. They might even have the perception that they can handle snow and ice driving and that overconfidence would lead to even more accidents.

These principles are not new. The International Road Federation, a group of world-wide safety experts, made the point loud and clear in a recent paper. The point is that firms should be training drivers to have the insight to avoid emergency situations, not the skills to overcome emergency situations. Skills like how to stop a slide on snow are easy to forget and can give overconfidence to the drivers. They actually make things worse. Read the study on their website here.

It's better to focus on courses that clearly show the risk that drivers face so they can avoid them, not attempt to react to them. Further, it makes sense to hire drivers that are risk averse, not risk takers.

AvatarFleet CEO Mark G. Gardner commented:
"Providing a professional driver with training on how to respond to a skid actually presumes that we expect they will one day be in a skid. We should create the expectation/norm that they will never be going that fast, or putting themselves in that much danger in the first place. Better to teach (as the paper aptly points out) risk aversion and avoidance procedures.

This is also related to risk compensation. The safer we make a situation through engineering controls such as antilock brakes, airbags, rearview cameras, etc., the more risks people will be willing to accept. This is also true of advanced driver training on near-miss or disaster-recovery skills. Once they have that training, they are more willing to accept the risks for which they now think they are prepared."