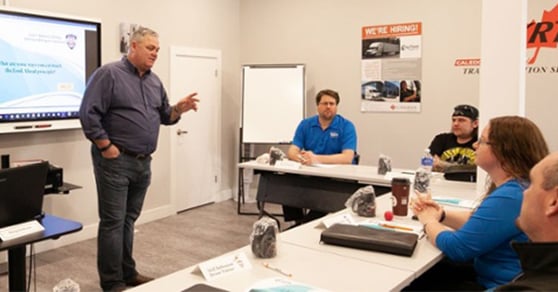 Getting a new truck driver off to a good start is of the utmost importance. It can be the difference between the driver having a solid career with your company and him or her leaving you in short period of time. Driver onboarding integrates the new driver into your trucking company and assists with retention, motivation, driving satisfaction, and quickly enables each driver to become productive.

There’s a lot to cram into a few-day period that causes orientation to turn into a sheep dip and not a big hug and kiss. There are some necessary items like paperwork, cover your behind with signing a policy manual, and assigning a truck and dispatcher.  Items that need to be included on the checklist are:

Take some time to investigate your company’s onboarding process.

You’ve done hard work of advertising, recruiting, and vetting your new driver hires. Give onboarding the attention it deserves by going through your own process as a fly on the wall. And remember – onboarding is a process, not an event. What check-in points and celebrations can you implement during the first 7, 30, 60, 90 days?

Each interaction of a new driver can be seen as a net positive or a net negative. The goal should be to make each interaction a net plus, a positive weight put on your company’s scale. The driver needs to feel that he/she made a good decision to join you. That you care. On the other hand, boredom, confusion, lack of preparation, and seemingly impersonal relationships put a negative weight on the driver scale…a big no-no.

A big way this happens is when we “process” drivers. We set up an assembly line to make things go smoothly but don’t give enough “weight” to the people side.

Busy staff tend to move from task to task. This is when drivers perceive that they are “being treated like a number”. Staff members often get primarily rewarded for efficiency, getting lots of stuff done and crossing all the t's and dotting all the i’s, and rewarded less for relationship building. Being empathetic and building connections takes time… it’s hard to measure.

However, a great way to lessen the awesome cost of turnover is to put more emphasis on relationships and less direct emphasis on reducing costs and making money. The money will follow. Businesses are people. The personal consideration that drivers are shown by those involved in orientation is key. To a driver, your company is full of people he or she deals with every day.

Therefore, don’t “process” drivers during orientation. Invest in human touches. Make them comfortable. Don’t bore them. Don’t confuse them. Don’t overwhelm them with things that “have to be done.” Don’t starve them. Do everything you can to make orientation and onboarding a positive experience.

We’ve considered how each interaction of a new driver can be seen as a net positive or a net negative. The goal should be to make each interaction a net plus, a positive weight put on the scale that weighs a driver’s satisfaction with your company.

One of those positive or negative weights has to do with paperwork. Every new driver has to fill in a lot of paperwork. That includes everything from W-2 forms for payroll, I-9 forms to verify that the driver is a citizen, to medical and insurance benefits and on and on. Drivers are also asked to bring documents with them to prove their credentials. They’re also asked to sign documents that they “understand” and “acknowledge” all of the legalese presented to them so you can cover your behind in the future.

This process can be very boring and robotic. It’s important that it must hot become that way.

Orientation at your company can most likely be improved if your answer to why something happens is: “we’ve always done it this way”. There are Applicant Tracking Systems that allow you to automate this paperwork when the driver has to redundantly write in the same information dozens of times (i.e. name, address, social, etc.). Most of this information has already been captured during the application process – let’s repopulate that data so the driver doesn’t have to!

Those helping drivers with orientation paperwork need to be cheerful, helpful and encouraging. When someone forgets to bring a needed piece of paperwork, it’s better to say, “Okay that happens a lot. Here’s what we can do.” That’s much better than “Didn’t we tell you to bring that in,” or “You’ll have to ….” or “You can’t start driving until….”. In general, position yourself as a helper, not an enforcer.

Anticipate questions and answer them in advance. “A lot of people want to know how many deductions they can claim. The general rule is…”. Be prepared to explain “why” in an easy-to-understand way.

Don’t overlook first-timers. Relatively new drivers may require more help with paperwork. Know who they are and be prepared to give them a bit more help, if needed.

Remember that filling out new hire paperwork is something that most of us would rather avoid. Keeping it friendly and helpful, rather than robotic and procedural, is a necessity to make a new driver feel welcome. Be prepared to help.

Everyone agrees that focusing on safety has to be part of a good onboarding or orientation program. But the best way to incorporate safe practices is not so easy. It’s certainly more than giving a lecture and then having drivers sign a document indicating that they “understand” and “acknowledge”.

Here are some suggestions:

Safety doesn’t have to be boring and repetitive. Look for ways to make it interesting and get drivers actively involved in teaching the concepts to others rather than being a passive audience. Embed safety in all orientation sessions and make it a supreme value.